Despite being a Microsoft powerhouse and promising philanthropist featured on the cover of Time magazine, Lily Kanter left the corporate world. She had met Marc Sarosi, the owner of Africa Gems, before Internet dating—through a personal ad. He paid $50 extra to put his headline in bold type: Gem in the Rough. They both wanted a family. And every Friday night, as Kanter and Sarosi gather at their long dining room table with their three teenage sons and one or two other families for a Shabbat dinner, she knows she made the right decision. “Since I left my corporate job,” she says, “I’ve been charting my own path of what brings me joy every day.”

The dining table, which Lily had custom-made, seats 16 comfortably for Shabbat dinners

Part of that path has been starting three companies. Gen X parents are known for their entrepreneurial spirit (they launch the most start-ups), and Kanter, 53, could be exhibit A. As a new mom in 2002, she opened Mill Valley Baby and Kids, a specialty baby-furnishings store that carried the products she couldn’t find elsewhere. There she met Serena Dugan, and in 2004, the two partnered to launch the home design and furnishings brand Serena & Lily, which maintains a cult-like following today. Ever the entrepreneur and impassioned by philanthropy, Kanter in 2017 started Boon Supply, originally a school-supply fundraising company that now sells goods for other nonprofit fundraisers, giving 50 percent of revenues to the charity of the buyer’s choice. “I truly believe in capitalism as a force for good,” she says. “We have already raised $10 million for schools and teams in one year. It’s a very fulfilling way to spend my days.”

“Since I left my corporate job, I’ve been charting my own path of what brings me joy every day.”

Kanter entertains often and set up a quiet retreat in the new yurt for guests. It has a kitchenette, indoor plumbing, and an outdoor fire pit.

Despite the demands of work, family has always been the priority. Kanter and Sarosi, 57, bought their house after the birth of their third son 13 years ago with an aim to create a place where the kids would want to hang out. “You needed serious vision to see through the cobwebs and rusty toilets,” she says. The family spent most of their time in the large third floor as they renovated the rest. With tricycles, jungle gyms, and a child safety gate on the stairs, it was a “serious romper room,” says Kanter. Now the “teenager hangout,” the third floor includes foosball and air hockey tables, a movie theater screen with a popcorn machine, plus three sofas and two king-size beds. “We are definitely the sleepover house that we always wanted to be,” she says. 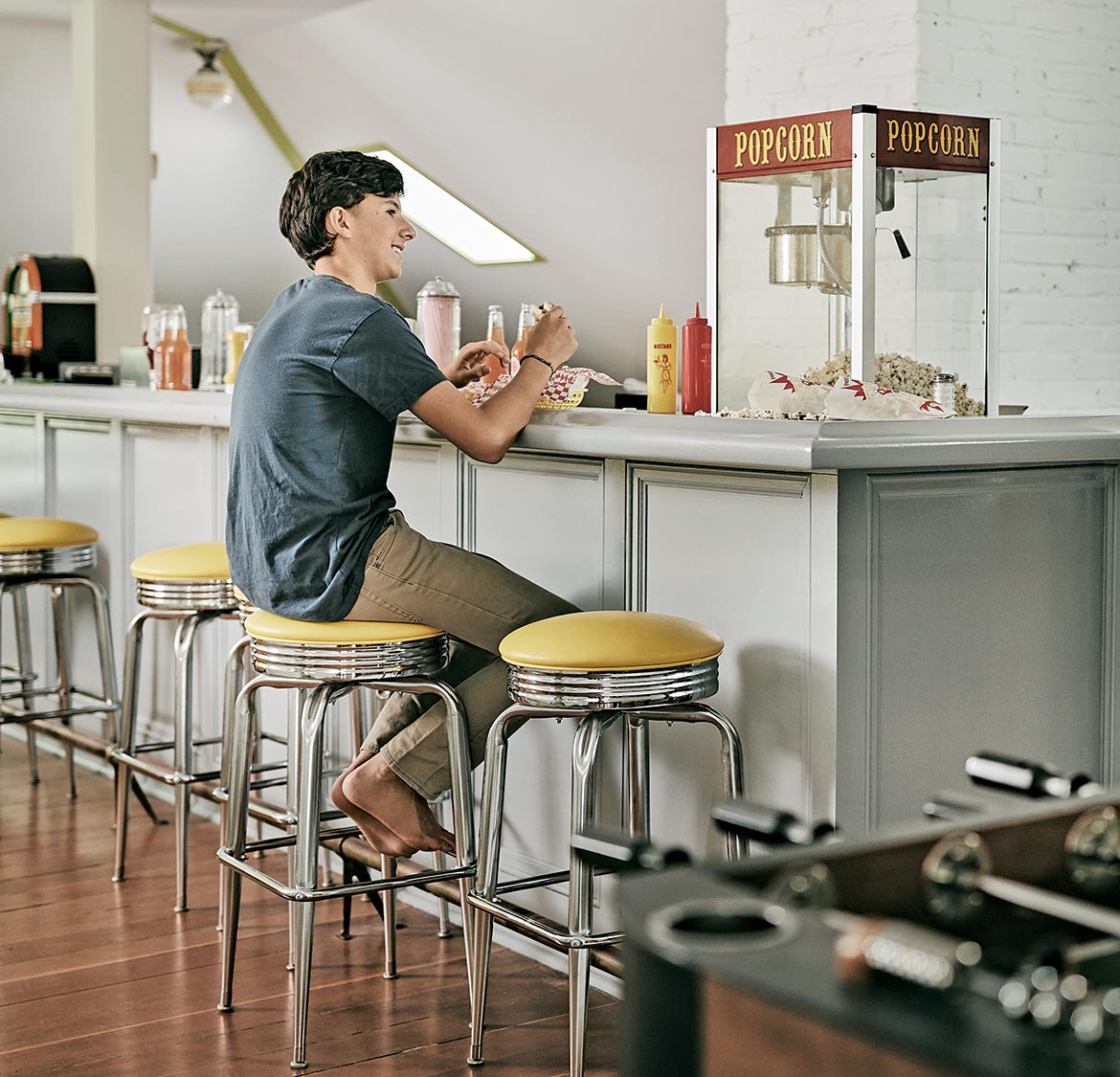 Zeke, 15, loves climbing and even climbed Kilimanjaro on his own two years ago. 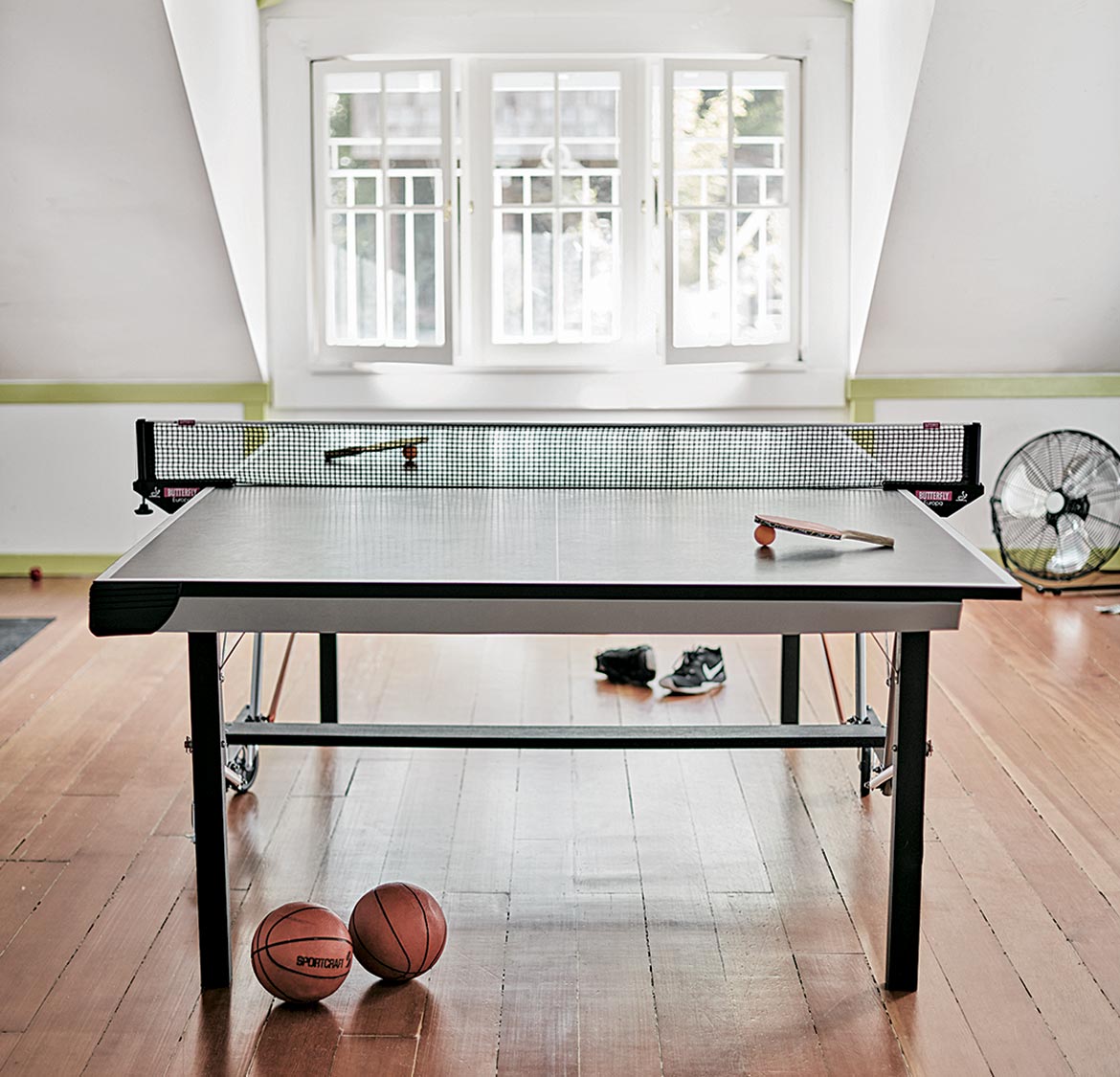 Ping-pong is popular in the third-floor playroom. “Our house is relaxed and not too formal,” says Kanter. “There’s chipped paint on every wall from the boys playing ball.” 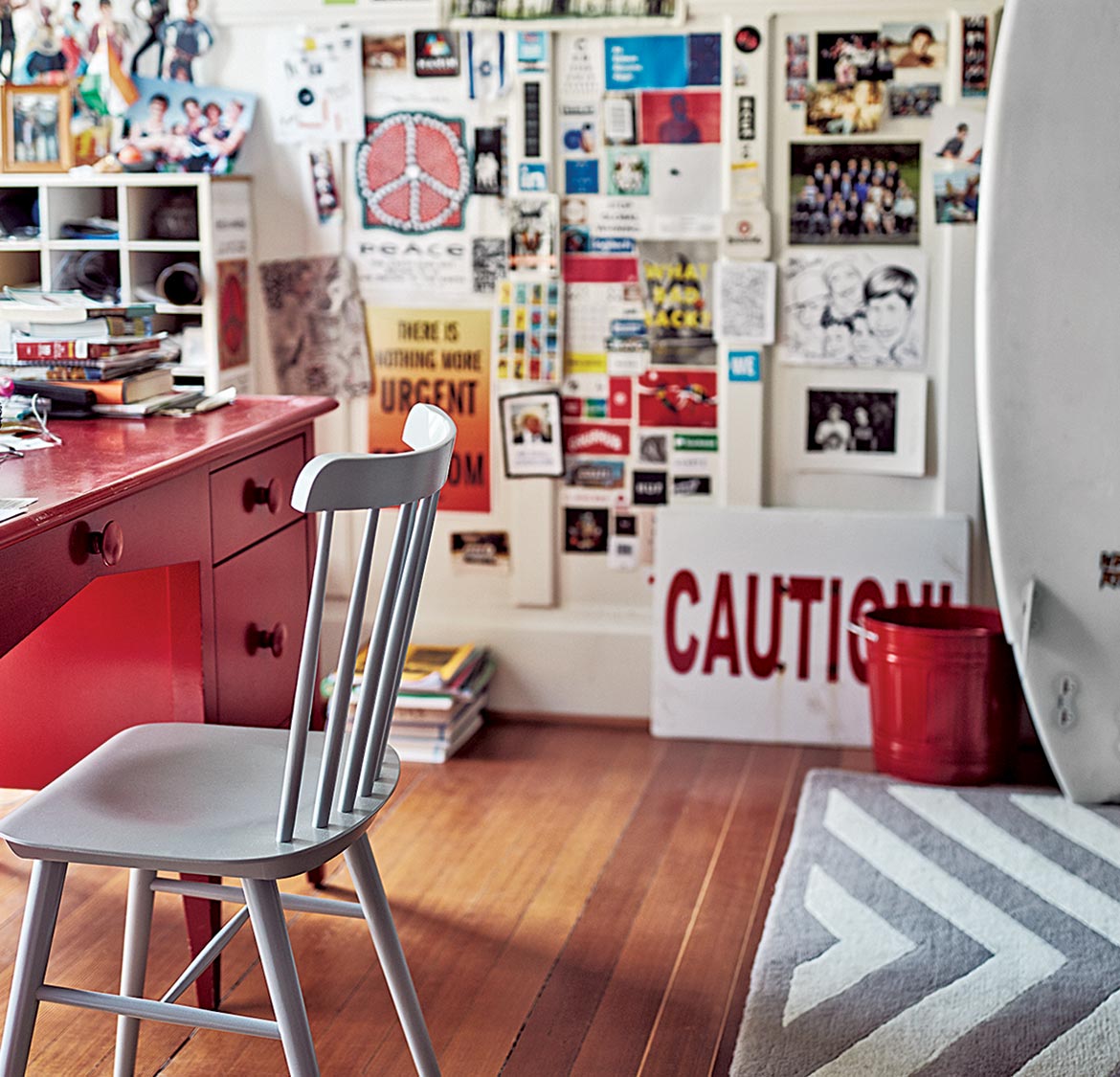 “I tossed in the towel several years ago on having their rooms look a certain way,” says Kanter. “As my mom used to say, ‘Just close the door.’”
Slider Text

During the renovation, the family put an emphasis on storage in the bedrooms. “We love home organization,” says Kanter, who devotes several hours a week to reordering a closet or room. “Organization makes me happy and more relaxed. There is such a sense of joy to open a perfectly organized closet, not to mention a great way to find what you’re looking for,” she says. “Our house is plenty messy, but thankfully we have lots of closet space, so I tuck it all away. It’s amazing what a decluttered space does for the mind.”

The boys have storage built-ins in their rooms, to keep everything from sporting equipment to childhood memories organized.

“We are definitely the sleepover house that we always wanted to be.”

Family time is spent playing tennis and taking adventures abroad for international volunteer projects. They have built classrooms in Kenya, India, and Ecuador and have served lunch at an AIDS orphanage in Zambia. Closer to home, they deliver Meals on Wheels to seniors in Marin County through Jewish Family and Children’s Services. “A deep sense of community is very important to our family,”  says Kanter. “We also value that it feels better to give to people less fortunate than to collect more stuff.”

So when Kanter looks down the Shabbat table, she feels happy. The phones are put away—even hers—though she knows they will emerge as dessert is served. “Those things are the most difficult for a parent in today’s world,” she says. ”We caved in and gave our youngest son a smartphone in sixth grade. I wish we could rewind that decision.” Otherwise she has no child-rearing regrets. She has created a welcoming space and feels sure that, as the nest begins to empty, their sons will still want to come home.

Sarosi creates a photo book to document each one of the family’s travel adventures, including trips to Namibia and Zambique. “The house is filled with family pictures,” says Kanter. “Our family is our number-one pride and joy.”