For Amy Azzarito and Mark Fujiwara, their newlywed life is all about mergers and acquisitions 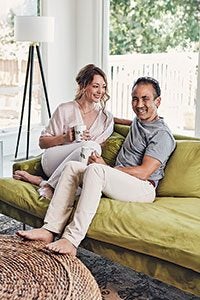 Setting up house with a partner is both exciting and challenging. Nesting is about trying to make each other happy, combining lifestyles and acquiring things that bring equal joy. It’s a time of promise and potential. Like many couples today, Amy Azzarito and Mark Fujiwara married later in life—he was 49 and she was 40—and already had fully formed lives and tastes. And they wanted a mutually satisfying style. Not his or hers, but theirs. A longtime Brooklyn resident, Azzarito had moved back to California to be nearer to her sisters—and find a permanent relationship and a permanent home. On her first eharmony date with Fujiwara, they talked for two hours before opening the menu. With foresight, she drank nothing but water to avoid seeing him “with wine-colored eyes.” They didn’t live together until they had been engaged for several months.

“The house was a blank canvas and required little renovation, which was amazing. Now we’re focused on making it our own.”

In the bedroom, a window seat topped with custom blush-pink velvet cushions and extra-large storage drawers underneath provides storage without distracting from the view.

Many couples who come to marriage bring their own symbols of commitment (such as sofas). But Fujiwara and Azzarito wanted a more potent one: a house. They found a split-level, 3,400-square-foot house in Marin County with a view of the San Francisco Bay. Fujiwara, a wealth manager for Baird, had often visited the area while growing up; it was near the home of the oldest of his 90 cousins. Azzarito liked the private downstairs floor for the master bedroom and the his and hers offices, with space for Fujiwara’s sports memorabilia and her design books. She also loved the clean layout. “The house was a blank canvas and required little renovation, which was amazing.” she says. “Now we’re focused on making it our own.”

Fujiwara’s pocket square collection lives in a pull-out tray in the closet. “He wears a suit every day, so that’s how he expresses himself,” says Azzarito.

Azzarito has deep experience in home design. She’s predicted trends for more than a decade, first as managing editor of Design*Sponge—a pioneering blog—and later as a sought-after contributor to Design Milk, Architectural Digest, Brit + Co, Food52, and others. A degree from Parsons in the history of decorative arts and design has made her a frequent lecturer. Her first book, Past & Present, incorporated design history into modern craft. Her next book, working title Nest: A History of the Things That Make a House a Home, is almost finished. So Fujiwara encourages her to take the lead when it comes to design. When she first saw the master bedroom in their new home, for example, the closet area (which was larger than the Brooklyn studio she had previously lived in) did not suffice. “I wanted something that beautifully organized what we own but wasn’t so giant and crazy that it was out of control,” she says. So she installed lighted hanging rods and shoe racks to blend sophistication with efficiency. “I love the way it honors what you own.”

After a honeymoon in Japan, Azzarito and Fujiwara moved in. Their living room is a gathering place for family—particularly Fujiwara’s children, ages 15 and 13, from a previous marriage; his extended family who lives nearby; and Azzarito’s sisters. Their life together has begun—and with it, a new culture for a union of two, surrounded by the people and things they love most.