No One is an Island

For Christine Ralphs, it was love at first sight—albeit the second time around. The year was 1991 and the scene Snake Island, one of a trio of islands an hour outside Toronto. Christine and her husband, Peter, were boating the lake with friends, the wind mighty and alive. On a lark, they took to shore and happened upon a run-down cottage for sale. “Let’s buy it,” Peter urged Christine. But Christine, a former display artist for Harrods who had met Peter in London, scoffed at the idea. Who would want to spend weekends in a funky island community where everything from brie to bottled water had to be schlepped by barge and the main activity appeared to be swatting mosquitoes?

Cottaging, a term Canadians like so much they made it a verb, has a long tradition in a country where summer is savored and revered, lived in slow motion after long, brutally cold winters. Snake Island—like its siblings Fox and Georgina islands, also located on Lake Simcoe—is the property of the Chippewas, an Indian band that began leasing the land to urban expats in the 1930s and 1940s. Currently, it is home to about 200 summer cottages that tend to be passed down from generation to generation or sold by word of mouth. The limited inventory rarely hits the market.

It only took a few days for a change of heart to hit Christine so suddenly that she jumped from a table, mid-dinner party in Toronto, to exclaim, “Oh my god, we’ve made a mistake. We have to buy the cottage.” She and Peter traveled back the next day, only to learn the house had been sold the day before. Crushed, they noticed an old man, one “about to keel over,” standing near the water. They asked if he knew of anything for sale. He said, “As a matter of fact, yes.”

Cottaging, a term Canadians like so much they made it a verb, has a long tradition in a country where summer is savored and revered, lived in slow motion after the long, brutally cold winters.

He pointed them in the right direction, and soon they were climbing rickety stairs to a dirty brown bungalow, marked with a tiny weathered sign that read “Lola.” It was owned by 86-year-old Viola Patterson, who greeted them. “It was a dump. I fell in love immediately,” says Christine.

With only $10 between them, the Ralphs made an offer and handed over the meager sum as a deposit to secure the sale. “I like you,” said Patterson, undeterred by the informality of the transaction. “It’s yours.” Realizing Patterson’s concern about moving a lifetime of belongings off the island, Christine and Peter agreed to take Lola as is. Sure enough, when they took possession of the cottage at the end of the season in 1991, “there was still toast in the toaster,” remembers Christine. 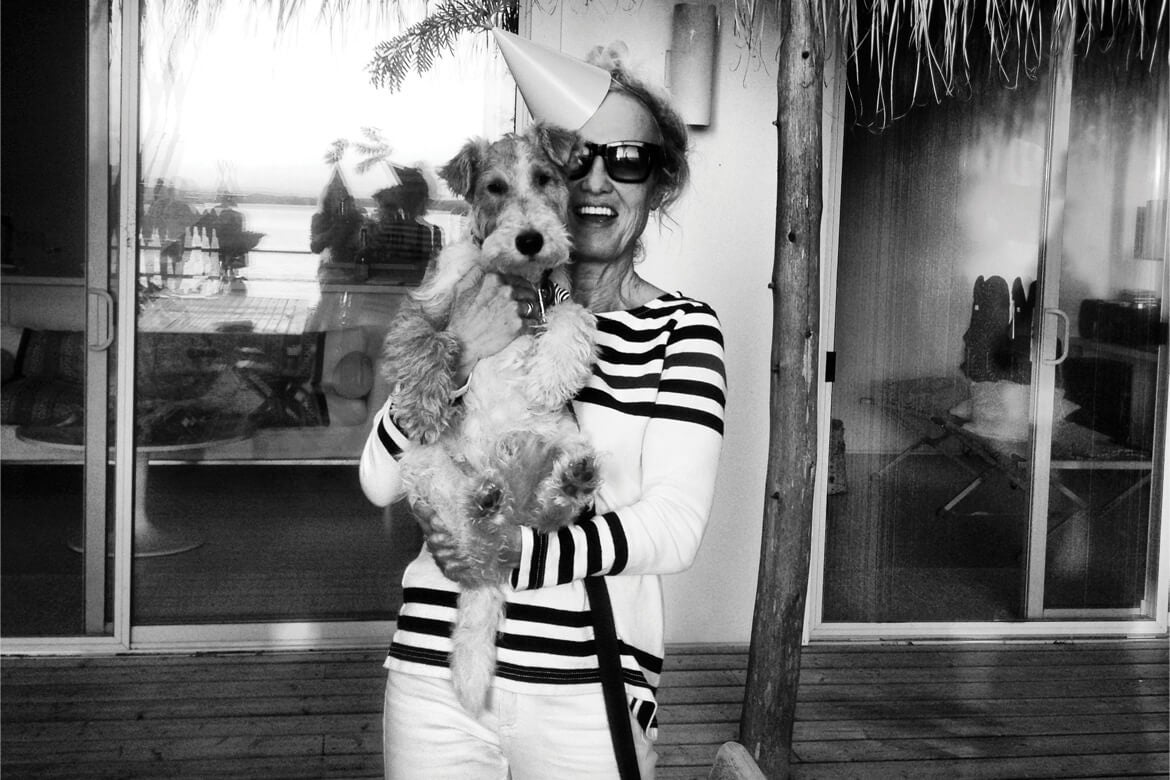 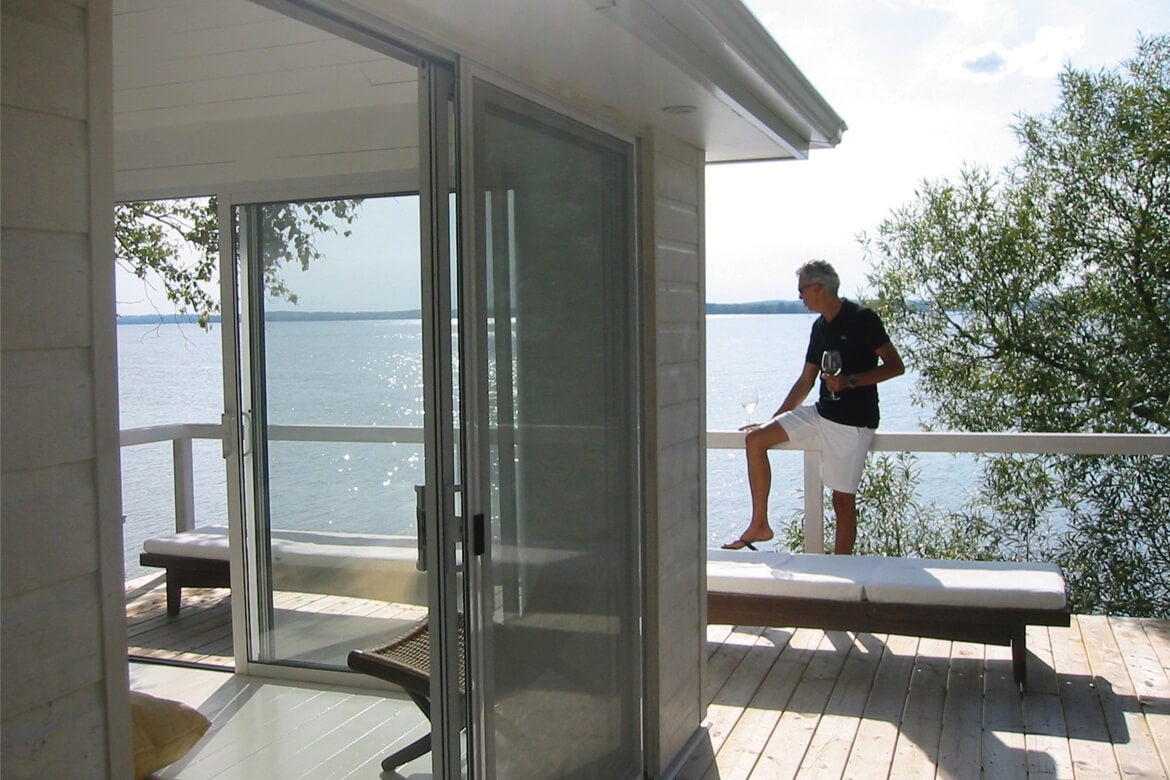 David Lloyd outside the boathouse bedroom 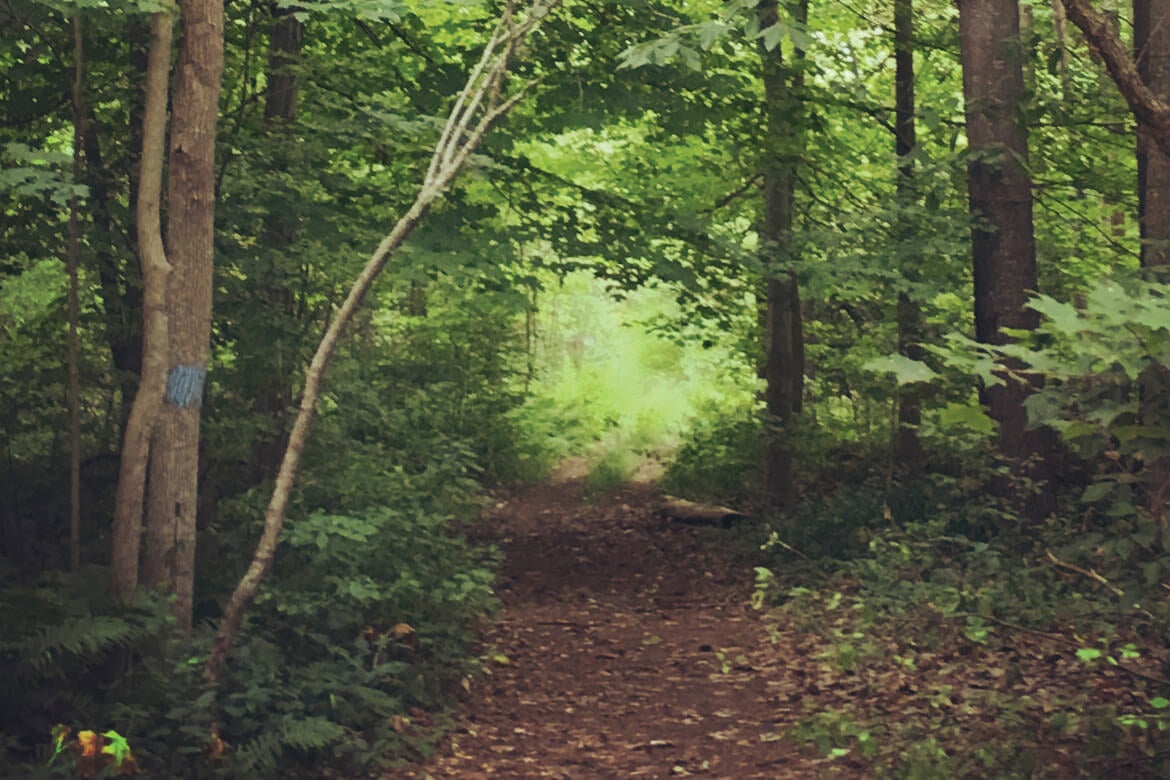 A walking path through the Canadian woods 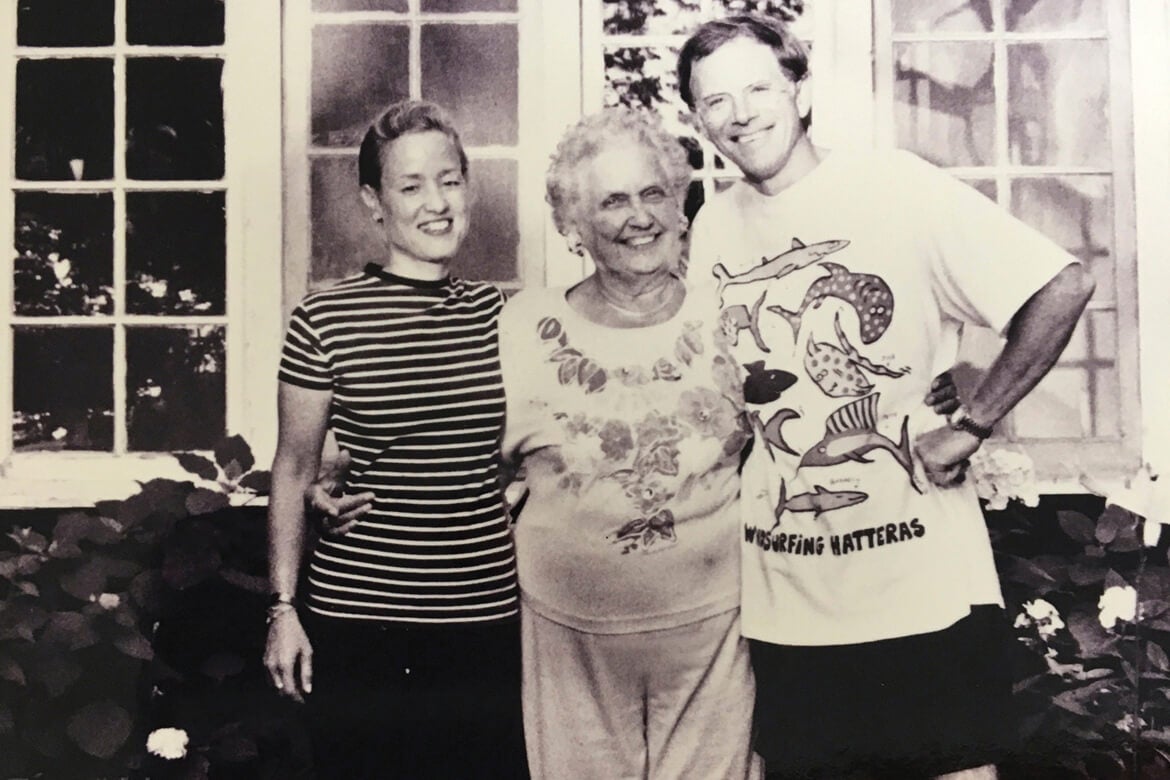 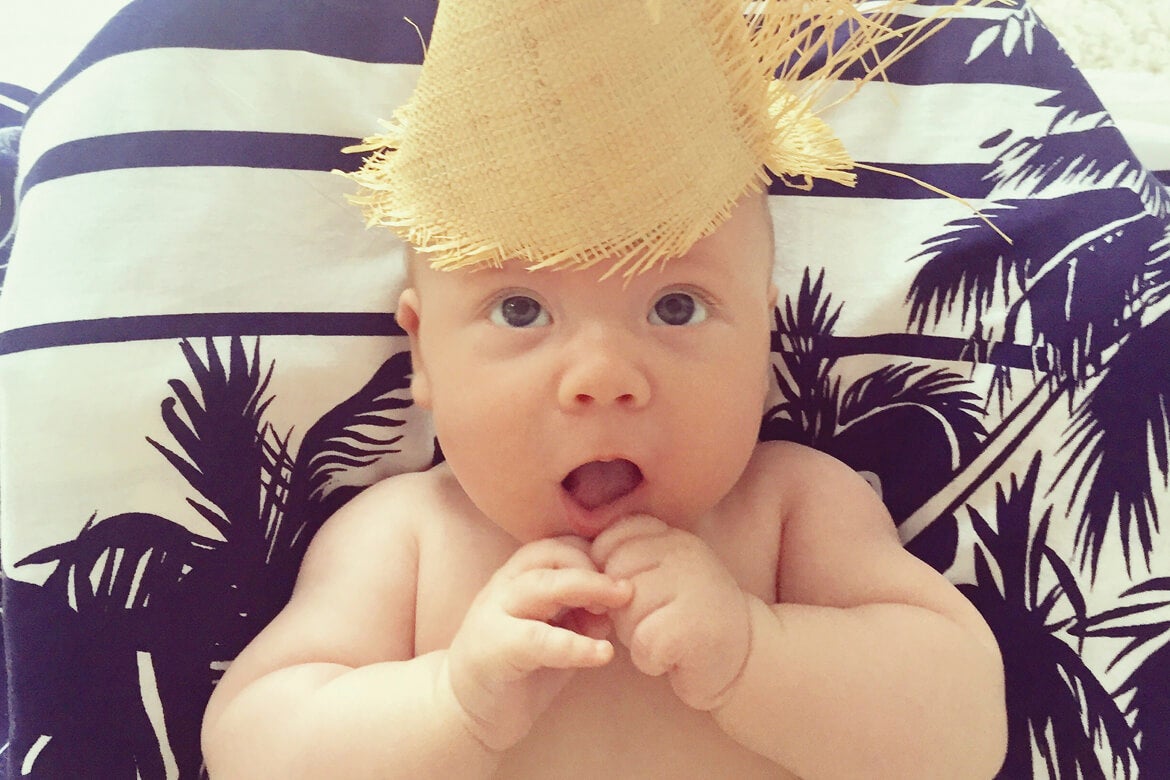 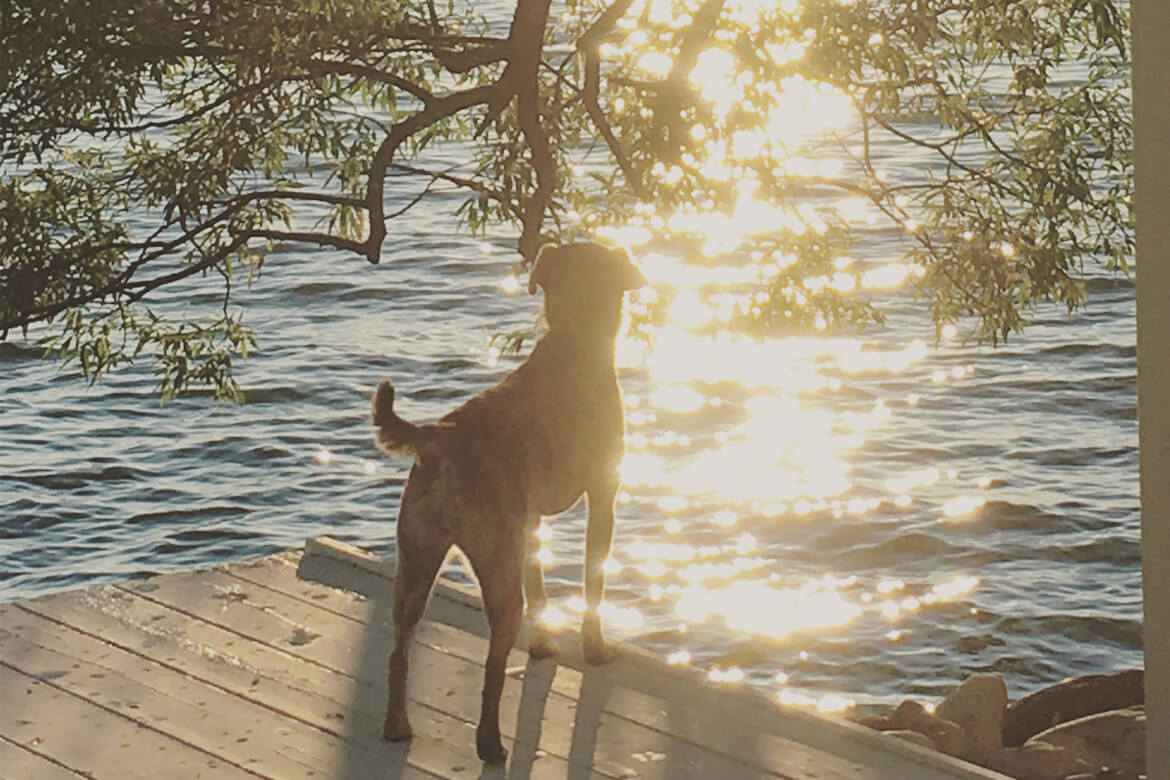 Any uncertainty about their impromptu purchase dissolved immediately upon arrival, and the couple took to cottaging with enthusiasm. Christine painted the bungalow turquoise and hung hula skirts for curtains. A few years later, they bought and renovated the shack next door for a guest house, and in 2002, they tore down Lola to build an A-frame inspired by beachfront houses in England and Uruguay. An expansive deck stretched from sliding doors at the house’s front to the forested hillside sloping toward the lake, providing room for a large communal table and chairs, his-and-her lounges, giant mushrooming beach umbrellas, and a “sky bar” perfect for sundowners. Weekend after weekend, they gladly imported friends—up to 30 at a time—for lazy lunches, starlit dinners, and endless dance parties. “Eventually, we felt like staff at a resort,” says Christine.

Fortuitously, the ranch-style house next door came up for sale, complete with a boathouse—great luck as island rules forbid the construction of boathouses, unless one already exists. David and Michelle Lloyd, dear friends of Christine and Peter’s since the women worked as senior vice presidents at Club Monaco and later opened the interior design firm Lloyd Ralphs Design, snapped it up. Shortly after, Jenn Cranston, a Toronto stylist, creative director, and recent founder of the blog Outsider, bought the renovated guest house. All the houses are painted “pioneer white”—an anomaly for Snake Island, which favors “ramshackle brown.” 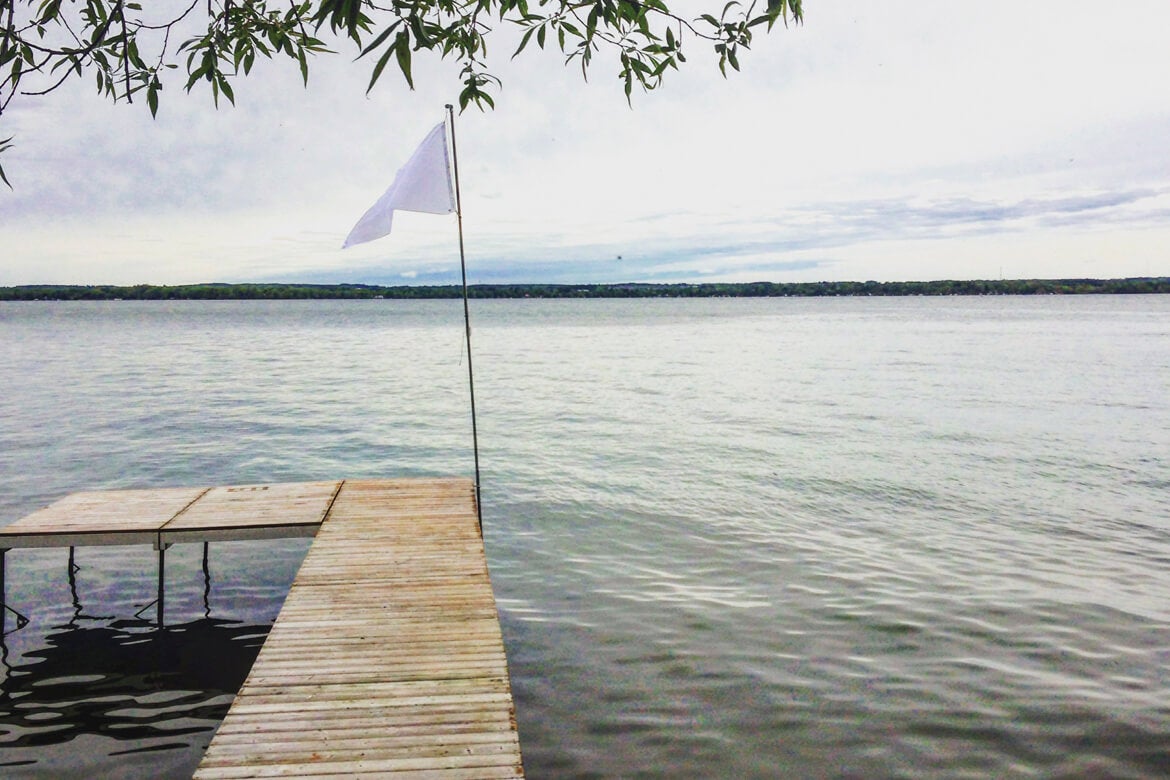 The pier to Lake Simcoe 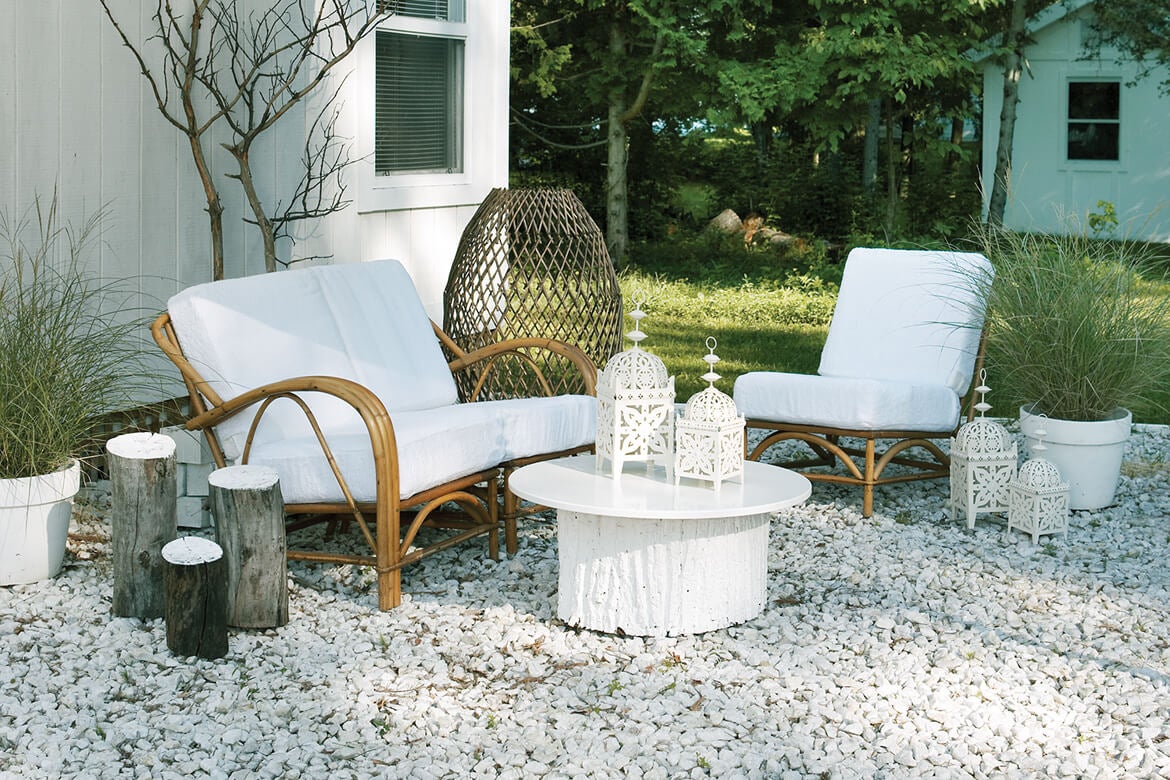 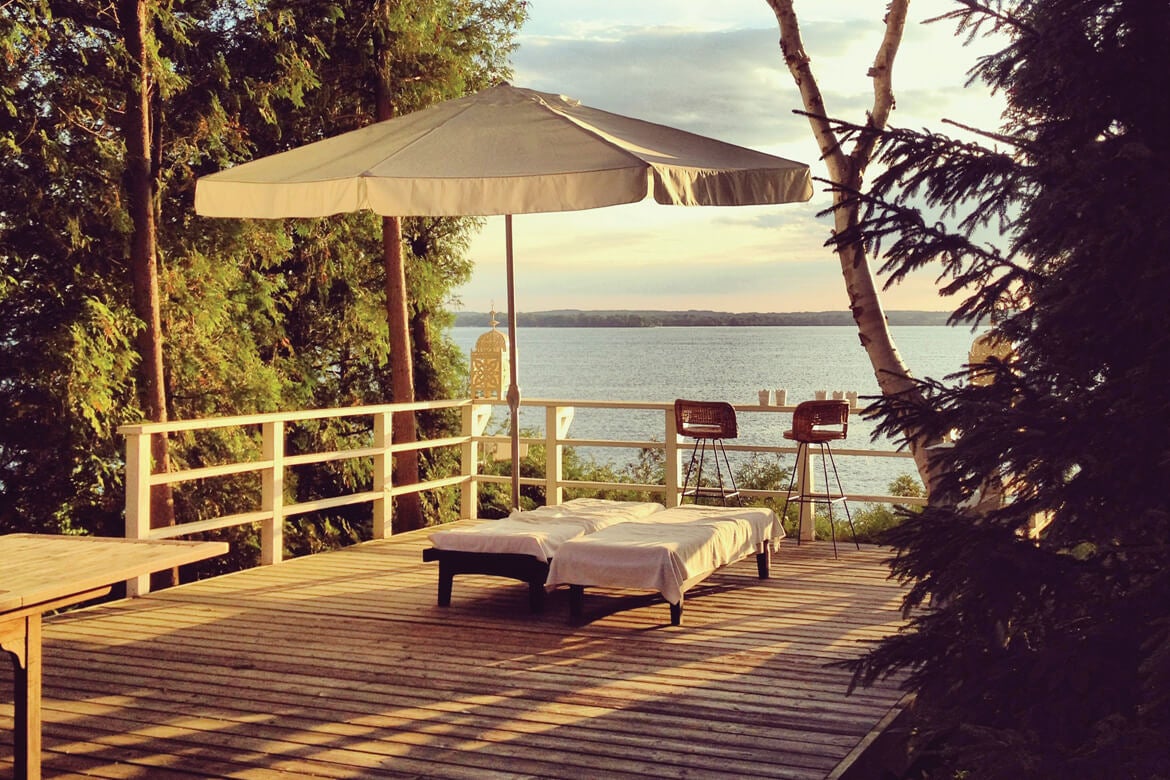 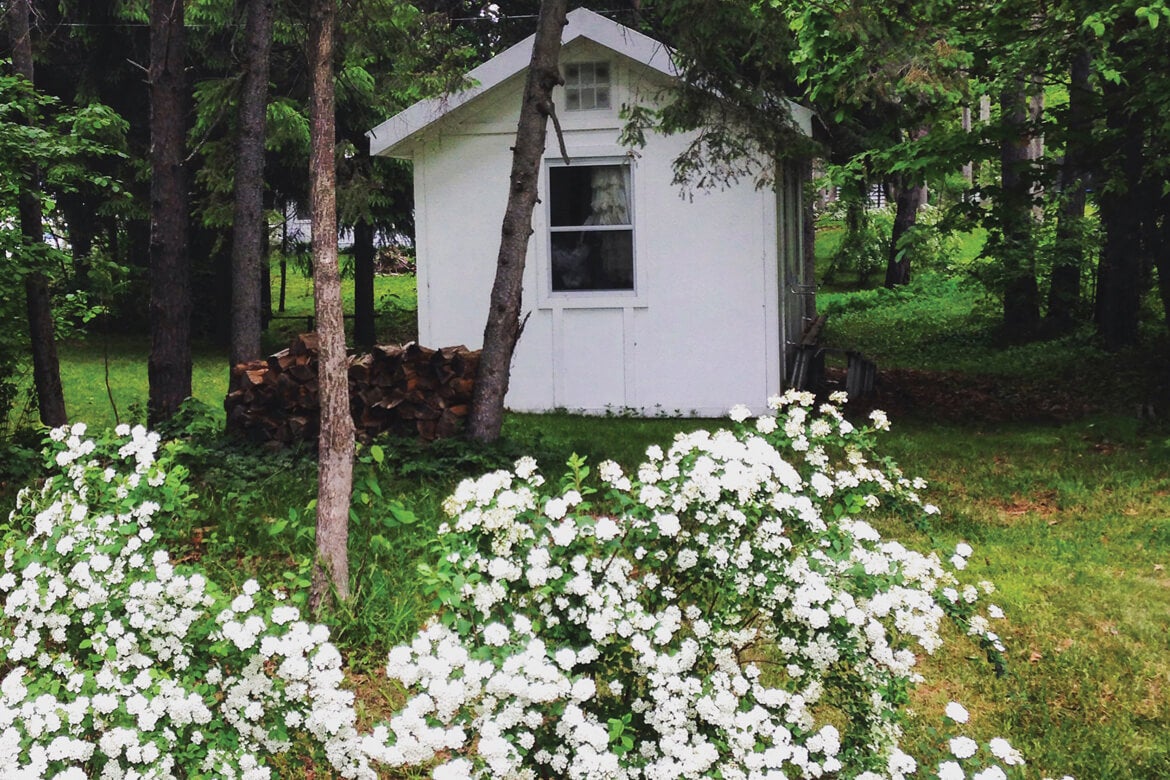 The three white cottages have become a kind of accidental family compound. Atop the boathouse, David and Michelle built a bedroom to accommodate their daughter Olympia, a designer for J.Crew in New York; her French filmmaker husband, Matt; and baby Ulysses, when they visit for summers. Nearby, Peter’s brother and family bought a house, adding “bunkies”—bedroom-only outbuildings for their three adult sons. Sadly, in 2014, Peter died, but his invigorating spirit lives on through his curated mix tapes that never fail to inspire dance parties. Donning the hula skirts once used as window curtains, guests dance late into the evening, like a band of stranded castaways beneath an illuminating moon.

Partying aside, the beauty of Snake Island lies in the low-key, stress-free reprieve from city life. Planning is kept to a minimum, and working is frowned upon. The one routine adamantly followed is “family dinner” two nights a weekend, featuring a honed rotation of chefs from all three houses. And, of course, the long walks—the circumference of the island is about 2.25 miles among towering Canadian firs and gypsy wildflowers—and July’s annual summer regalia, complete with a spirited 5K run and three-legged sack races for the kids. From May to October, windsurfing, swimming, and boating fill the days, trails of laughter carrying from wake to shore along summer’s warm, lazy breeze.

But what Christine loves most—as do Michelle and Olympia—is a dry scotch martini at the “sky bar,” the lake stretching before her. “I could sit there in the evening and gaze endlessly at the water. It’s heaven,” says Christine, the once reluctant cottager. “It’s just heaven.”